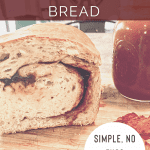 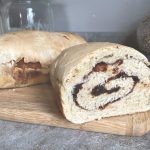 This sourdough cinnamon bread is a simple sandwich loaf recipe with a slight modification to get a delicious cinnamon swirl on the inside.

This is my go-to recipe when I want some kind of cinnamon flavored baked good, but don’t quite want the hassle of sourdough cinnamon rolls. I feel like this dough is much easier to work with than cinnamon roll dough, too. The top of the dough gets nice and golden brown, with no egg wash necessary. It is truly a lovely loaf to create.

I remember the days when I used to regularly make bread in my bread machine using commercial yeast. Now that I’ve learned sourdough, baking bread this way just seems much easier and comes more naturally. If you’re still using a bread machine, don’t be afraid to learn sourdough. It’s worth it.

And believe me when I say this bread is super simple. If you’re new around here, you need to know that I love baking and sourdough bread recipes. But what I don’t love is doing things that are exceptionally difficult because, well, I just don’t want to. I’m not a fan of complicated or unnecessary steps.

I truly believe that if I can make yummy sourdough cinnamon bread, then so can you. If you don’t have a starter yet, my posts on why sourdough starter is amazing and how to use a sourdough starter make great starting points. Now let’s get into this delicious recipe!

What’s Special About This Bread

There are so many great things about this recipe. But what makes it different from the rest? First of all, you can use this exact recipe to make a soft, slightly sweet sourdough sandwich loaf for your family. Instead of spreading the dough into a long rectangle and then rolling it up, you can omit the ingredients for the cinnamon swirl, trifold the dough, and shape it into a plain loaf. I like this because I can double or triple the batch and easily make both plain and cinnamon bread at the same time.

Secondly, this sourdough cinnamon bread uses just natural honey, cinnamon, and sea salt for the swirl instead of a brown sugar and butter mixture like most recipes do. Don’t get me wrong, I love me some butter. But this recipe is great if you’re needing to save your butter for other things!

Sourdough cinnamon bread makes amazing toast or french toast. That is, if the loaf somehow makes it to the fully cooled stage. I would be lying if I said our family doesn’t sometimes demolish this whole loaf of bread straight out of the oven. You can also easily add raisins to make sourdough cinnamon raisin bread, if that’s your thing.

If you want to see a short video of me making the dough, you can watch it on my Instagram page.

Is sourdough bread healthier for you?

There are many benefits to eating sourdough bread as opposed to traditional yeast breads. Sourdough bread in general is healthier due to the breakdown of phytic acid (an antinutrient), which happens during the fermentation process.

Phytic acid is found in wheat and can interfere with the absorption of certain nutrients as well as cause problems in the gut. Therefore, I prefer to eat soaked, sprouted, or fermented grains whenever possible.

What happens when you add honey to sourdough?

Using honey in sourdough bread doesn’t harm the rising process at all. In fact, sometimes I swap the sugar in this recipe for honey if I want to reduce the level of sour flavor. It can also help the rising process progress more quickly.

Using honey instead of sugar can be done in this sourdough cinnamon bread recipe, and doing so will give you a nice, tender crumb. Just be aware that it may make your dough a little stickier.

Should sourdough be room temperature before baking?

Sourdough tends to bake evenly whether the dough is cold or at room temp. There is nothing wrong at all with putting your dough in the fridge for a day or two if you aren’t quite ready to bake. In fact, this is what I typically do with my rustic sourdough bread.

For this particular recipe, the dough doesn’t need any cold time in the fridge, since it’s baked the next day after rising. However, if you need to put your dough in the fridge because you want to wait an extra day or two before baking, you can. Just shape the dough, place in a greased loaf pan, tie a plastic bag around it or cover with plastic wrap and chill.

Can I use butter instead of oil in sourdough cinnamon bread?

Yes, you can. Just make sure that your butter is very soft or melted before adding it to the dough so that it works in nicely. However, you don’t want your melted butter so hot that it cooks the dough.

Butter is great to use in sourdough breads like this one if you prefer fluffiness over chewiness.

Do I have to use bread flour for sourdough bread?

Using bread flour is preferable when making any bread recipe. However, if all you have is all-purpose flour, it will definitely work. As a matter of fact, I usually only have all-purpose flour on hand and I still find that it makes delicious bread.

Start by combining flour, water, sugar, active sourdough starter, oil, and salt with the dough hook in a stand mixer. Mix for about 5 minutes, or until a shaggy dough is formed. You can also use your hands and a large mixing bowl, if you don’t have a stand mixer. Then, cover with plastic wrap or a clean, damp tea towel and let bulk ferment at room temperature overnight (10-12 hours).

The next morning, punch down the dough and scrape it onto a lightly floured surface. I put dimples in the dough with my fingers to release air pockets for a tighter crumb.

Spread the dough into a rectangle. I like to make the rectangle a bit longer to make room for even more cinnamon swirl.

Roll the dough like you would cinnamon rolls, slightly pulling up as you go along. After that, be sure to pinch all seams as tightly as you can. Then, do a quick final shaping and place the dough in a loaf pan seam side down.

You will want to let the dough rest and rise in a warm place for another hour or so. I know, it’s hard to wait that long, but it makes such a difference! After the second rise, bake in a preheated, 400 degree oven for 40-50 minutes. I recommend checking the internal temperature to make sure the inside of the loaf isn’t still doughy. The thermometer should read at least 160 degrees. Once it’s done, let cool on a wire rack for as long as you can allow it to!

We love this sourdough cinnamon bread and I hope you do, too. If you try this recipe, I’d love for you to leave a comment and 5-star rating below!

If you like a softer crust, do this: Immediately after baking, rub softened butter over the top of the crust and cover with a clean tea towel to cool. This will add a yummy buttery flavor to the top of the bread and make the crust softer. 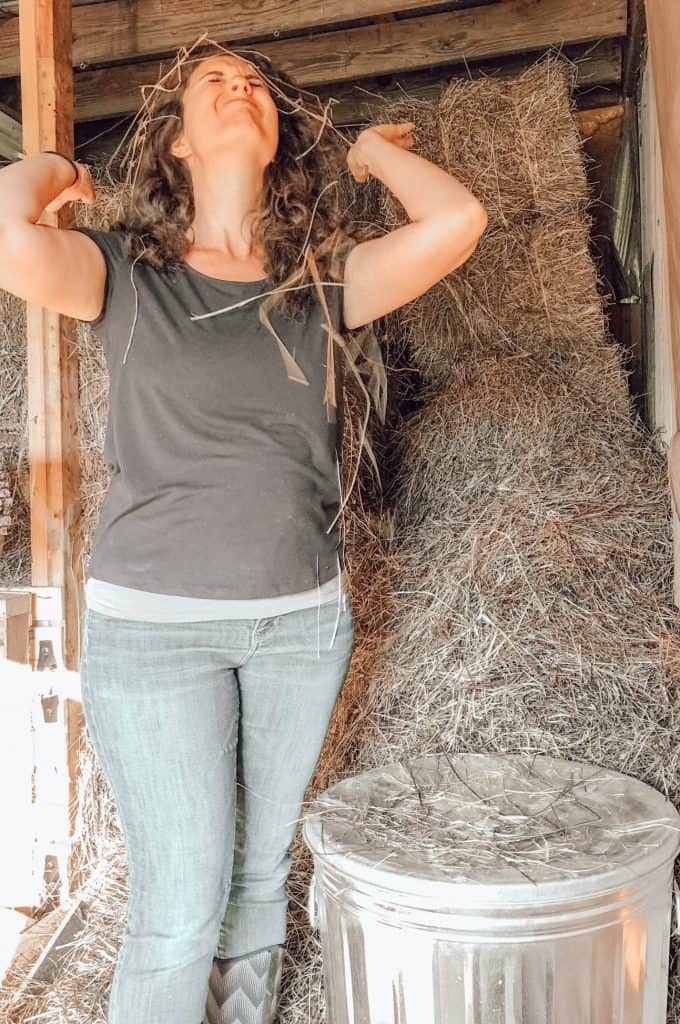 38 shares
Manage Cookie Consent
To provide the best experiences, we use technologies like cookies to store and/or access device information. Consenting to these technologies will allow us to process data such as browsing behavior or unique IDs on this site. Not consenting or withdrawing consent, may adversely affect certain features and functions.
Manage options Manage services Manage vendors Read more about these purposes
View preferences
{title} {title} {title}